We sponsored Bulldog Reporter’s 2009 Media Relations Summit in New York, held on Monday & Tuesday, May 18 & 19, 2009. As always, the conference was chock full of strategies and tools to bring back and put to use. 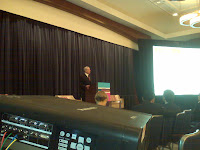 The first day included a keynote from Dan Rather with a critical look at the future of the media as we know it. He was both humble and sharp, and provided a keen critique of both the challenges facing the media and media’s responsibility in light of those challenges — technical, editorial and funding. I expected his address to be more controversial than it was given the criticism of his role in buildup to the Iraq war, but I guess that was saved for the second day’s keynote.

On Tuesday morning, Dan Abrams came out swinging and no one really seemed to know why. While there has been controversy about his new company and it’s role in providing journalists to councel corporate executives, he seemed act as though PR people are the source of that criticism, when in actuality, it’s more of his peers in the media that are leveling an ethics question his way. And it is a charge worth exploring. How can journalists provide counsel to companies who they may cover in the future? Does this limit what journalists will cover and is the self policing his journalists are practicing enough? In the age of media convergence, this is an issue that must be addressed, not just in relation to Dan Abrams company, but media wide.

We will blog more this week about individual sessions that we found most useful at Media Relations 2009. Stay tuned!